"Michael Blanchet stared through the window of his tank at a futuristic landscape bristling with dangers. An enemy tank came straight at him. As the two tanks bore down on each other across what looked like the surface of another planet, pyramids and cubes and other geometric shapes rumbled past. Mike fired. There was a hypergalactic blast. Mike was afraid he was dead.

As the debris blew off into space, he realized he was still alive. The enemy tank was gone. Mike was still the fastest gun in space. Now a flying saucer materialized in front of him. He aimed at the saucer, but at the same time he was aiming higher - at recognition, at reputation, at a chance to be a video-games contender.

For Mike was competing for a place in the first video-games world championship ... a coin-operated World Series ... an electronic Super Bowl ... a computerized heavyweight fight even a 90-pound weakling could win, for this is a push-button sport. The competition is being conducted by Atari Inc., which started the video-games explosion a decade ago. And the championship comes at a time when video games have established themselves as the new American games champions - world champs really -beating up pool, roughing up Monopoly and absolutely knocking pinball out cold.

After Asteroids, Atari brought out Battle Zone, which remains the state of the art in video games. The idea came out of a ''brainstorming'' session conducted among Atari's employees. Someone suggested a ''first-person tank game.'' In other words, the ''I'' would be inside the tank.

''With that game we did a lot we hadn't done before,'' says the man who programmed Battle Zone. I had to promise not to use his name. The business is that secretive. Atari does not want any other company trying to persuade its game makers to defect. Since Battle Zone was to be first-person, the nameless game programmer would have to invent all kinds of new techniques. He would have to create a simulated three-dimensional battleground for the ''I'' to roll through. Which required some very sophisticated mathematics to make the moving perspective come out right. If the ''I'' charges an enemy, the other tank has to loom larger and larger until someone gets killed. To create this effect, the programmer used not one, not two, but three microprocessors.

''In Battle Zone,'' says the programmer, ''you can move around in your own universe.'' The programmer bought a Battle Zone at a reduced rate and took it home to live with him. With his own game to play whenever he wanted to, the brains of Battle Zone eventually was able to achieve a high score of 540,000. When he took up Battle Zone, Mike set his game goal at a cool million. He loved the game because it was so difficult and required so much strategy. He spent many wooden quarters and sometimes even real quarters in his quest for his first million.

One Saturday, his day off, Mike went to Leisureland and played a marathon game of Battle Zone. On one quarter, he fought tanks, missiles and saucers for over six hours, scoring 2.5 million points. (The highest recorded score is 4,053,000.) When he finally walked away from the game with raw eyes, Mike still had tanks left, but he was suffering from severe Battle Zone fatigue. Some 25,000 Battle Zones were sold at a retail price of about $3,000. Which made it a big hit - number four on Atari's all-time hit list - but not a blockbuster. Perhaps Battle Zone was ahead of its time, like its great-great-grandfather, Computer Space.

''What kind of personality does Battle Zone have?'' asks the programmer. ''That's like asking what personality I have. Battle Zone is aggressive. It isn't cute. Pac-Man is cute.''

Under this kind of pressure, Mike told himself not to worry about getting blown up once or even twice, so long as he did not get killed three times. Then his war would be over.

So Mike charged tank after tank, taking no evasive action, living incredibly dangerously, blowing up one after the other. As always, he was pretending to be in the tank. It was the only way to play the game well. He knew the chances he was taking, and his heart was detonating like hand grenades.

As he raced ahead, Mike saw a tank come up behind him on his radar. The enemy was chasing him. He swung around immediately to face the enemy. He had to hurry before the other tank shot him in the back. This was a 360-degree war. What you couldn't see could hurt you.

When the enemy tank came into view, Mike saw that this time he would have to take evasive action or get killed. So he performed his favorite Battle Zone maneuver. He charged past the enemy, which he knew would cause the other tank to begin to turn in order to give chase. Suddenly, he stopped and backed up, catching the other tank in mid-turn, broadside. It was an easy shot.

Then another tank rolled into view just as a flying saucer materialized. The tank could kill him, but it was only worth 1,000 points. The passive saucer could not hurt him, but it was worth 5,000 points. He only had an instant to make up his mind. Since this was just a three-minute war, he decided to go for the saucer first and then try for the tank. Mike and the enemy tank fired simultaneously. The saucer exploded just as Mike's window cracked. He was dead, but he felt his life had been well spent. He had scored 5,000 points and he still had two more lives to lose in this war. " 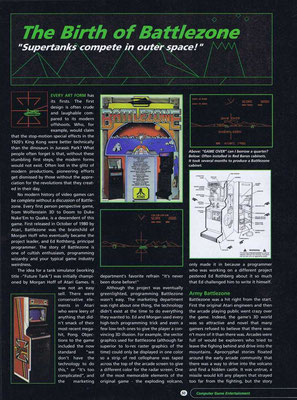 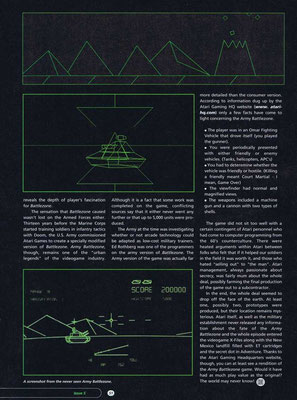 Trivia:
1) There was a persistent myth that one could actually drive to the erupting volcano in the background, up the side, into the crater and discover a castle inside. This was false, but plans to include such a feature in future versions were inspired by this myth. A similar rumor insisted if one kept driving in the same direction for at least an hour without dying, one would eventually reach the mountains and see a "tank factory" pumping out enemy tanks. Others involved the UFO, including one in which a mothership would attack after a set number of UFOs were destroyed. The first video game myths was born.
2) A version called Bradley Trainer (also known as Army Battlezone or Military Battlezone) was also designed for use by the U.S. Army as targeting training for gunners on the Bradley Fighting Vehicle.
3) Battlezone was housed in a standard upright arcade cabinet with a novel "periscope" viewfinder which the player used to view the game. The game action could also be viewed from the sides of the viewfinder for spectators to watch.
4) Game was popular from the start : as Battlezone took shape, engineers in the lab wanted to play it, a lot.
Developer Ed Rotberg :"Usually when you have a winner you leave your lab for awhile and when you return there are people standing around playing your game, and that happens over and over again. You end up having to kick them off your machine to get any work done. That is your first indication that you have a winner. And I have never seen a really strong game that did not have that appeal. The guys in the labs are pretty good barometers".

6) Game created more advanced and interactive three-dimensional game world than ever before.