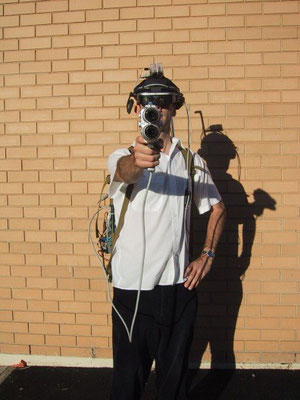 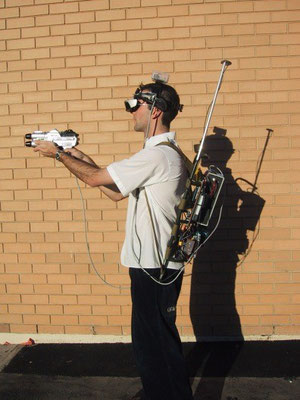 Magazine review  - Computers & Graphics, (2001)
"ARQuake is another example of a system that blends users in the real world with those in apurely virtual environment. A mobile AR user played a combatant in the computer game Quake, where the game ran with a virtual model of the real environment."

Trivia:
1) ARQuake is an Augmented Reality version (mod) of the popular Quake game by id Software. Created in the Wearable Computer Lab at the University of South Australia. Uses an AR head mounted display, special laptop based on Unix (in the bag on the back of the player), head tracker, GPS system to provide inputs to control the game, and small plastic gun prop.

2) The monsters' skin colour and texture were changed to make them easier to see and distinguish from the physical world.

6) Because of the police attention on the streets, realistic plastic gun props was replaced by kids toy.

7) First home augmented reality game is The Eye of Judgment (2007).

8) Game is not emulated.